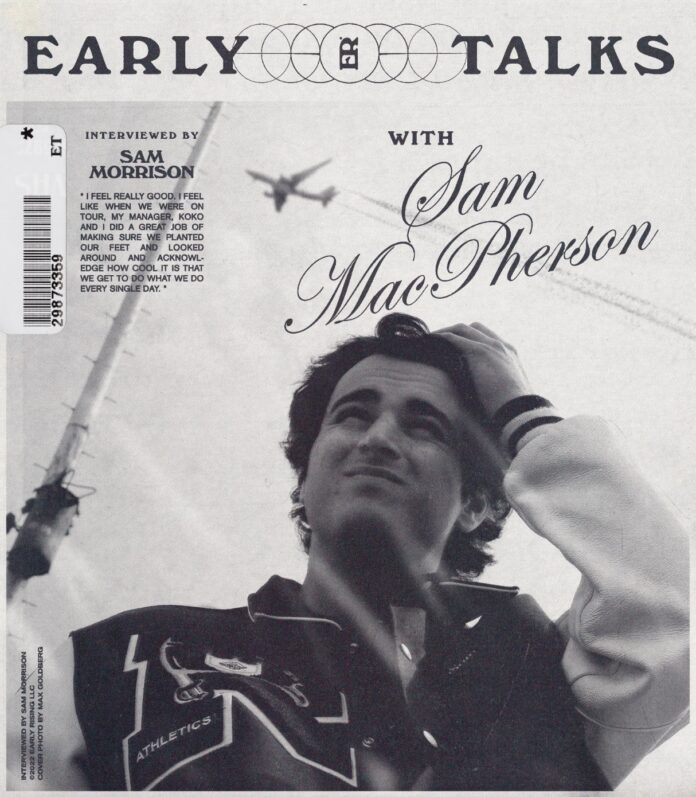 When you look at the music industry from top to bottom, LA-based artist Sam MacPherson undeniably ranks among the top singers and songwriters around in my humble opinion. From the moment I heard Sam for the first time, it was immediately evident that he wasn’t just a hopeful talent waiting for his chance, but instead, a star waiting for his inevitable rise. I’m not just a fan of Sam because we have the same name, but rather truly believe he has what it takes to boast a long and illustrious career. If you check out his Discography, there is a myriad of songs that stand alone as straight anthems and today, I had the chance to talk with Sam about his latest one that drops tonight. I’m so hype for this new track, so if you want to get to know more about it, continue reading this week’s installment of our Early Talks Interview Series with Sam MacPherson

Sam: Give me an overarching view of your upbringing…What was it like growing up in New Jersey?

Sam MacPherson: Growing up in New Jersey…It was a very small town and beach town vibes. A very music centric place as well because of my dad and my upbringing and even my mom’s taste in music. My dad was in to heavy hitting songwriters and my mom was playing like Stevie Wonder & Sam Cooke…very soulful singers. That’s where I got that pallet from; But yeah, I pretty much grew up with music all around me and as just a consumer of it too. I grew up near the beach, so we’d surf and do all the things that people do now. It was honestly amazing. I had a great childhood and I’m so grateful for that. I have great parents and I was around a lot of great people.

Sam: So I know you played Division 1 soccer; tell us the role that soccer played in your life growing up.

Sam MacPherson: Soccer was the thing. Soccer was what music is now. It’s what consumed all of my time the most. Obviously when I got to college, you would know, your relationship with that sport changes drastically; I realized I loved music as much as I do when there really was no hesitation to make that substitution. This is something I had done for 20 years of my life and I was like, if I had to give it up tomorrow, I’d be fine. So, it was a good thing to put music up against when I was trying to figure out if I really wanted this sport, because soccer was really the only thing that I did.

Sam: So with that, are you able to see or identify any similarities between soccer and the way you approach music on a daily basis?

Sam MacPherson: Yeah I think so . I think a lot of it has to do with realizing what you’re good at and what you’re not good at. I never was necessarily a freak athlete, the fastest or the strongest, but in terms of Soccer IQ, I was way smarter than most people. That was going to be my thing when it came to competing against other people. I was going to find a way to outwork them or find some way to be more strategic because I wasn’t running a 4.5 40 yard dash. I just knew where to put the ball. And music is the same. I’m not this ridiculous guitar player, I can produce and do other things pretty well, but when I put all of those things together, that’s what sets me a part from people who are unbelievable singers or unbelievable guitar players. And the songwriting thing is something that I just constantly pour myself into.

Sam: I love that and definitely see that. Going to switch it up a bit now and ask a simple question: How are you? How are you doing mentally with everything that’s going on in your life?

Sam MacPherson: I’m well. I feel like we never left LA. I feel like I just leave for a bit and then come right back to work. I have a session in a little bit to work on the next single after “Rookie”. I feel really good. I feel like when we were on tour, my manager, Koko and I did a great job of making sure we planted our feet and looked around and acknowledge how cool it is that we get to do what we do every single day. Now that I’m back here, I think I’m a little hungrier to be put in more situations like that. Everything has a potentiating effect on the next thing, because when these cool things happen, you’re like “Oh God, this is just as cool as I thought it would be, I really want to get back to this”. So, I’m doing very well, but the mission really remains the same.

Sam: Okay, so this interview is going to drop on Thursday, just in time for the song that you have coming out; So man, tell me about about “Rookie” as best as you can!

Sam MacPherson: This is probably one of the songs that’s taken the longest to write out of every song that I’ve written. It probably has around 4 or 5 different Frankenstein versions because I was literally trying to write it for two years straight. When I moved to LA it was one of the first songs I wrote here. One of the first ideas I had, one of the first choruses I was working on. The song was completely different than it is now. I was battling between really laying in on the metaphor or more just talking about the feeling or wondering how little league baseball I should go with it…Seasoned vet, rookie etc. It took me like a year and a half to really figure out what that balance should be and how serious I should take the metaphor or concept, but literally two different versions I brought it in to 3 different sessions with 3 different producers and ti just didn’t work. It wasn’t against anyone else, I just had to give myself time to figure out what I wanted it to mean and sound like. I thought the idea was great but I needed that right thing. I then brought it to Adam, who is just THE guy. I just know if I bring him something, he’s not going to fuck it up and we’re gonna figure it out. So I brought him a chorus and a verse and it was done, literally that day. From struggling with is for years and fighting for it, it was then done in a few hours. He went back and forth,  writing it and producing it and adding to it, so it really was a fight to the finish line. It’s finally done.

Sam MacPherson drops his newest track this evening called, “Rookie”, but in the meantime listen to his music right now on all streaming platforms!