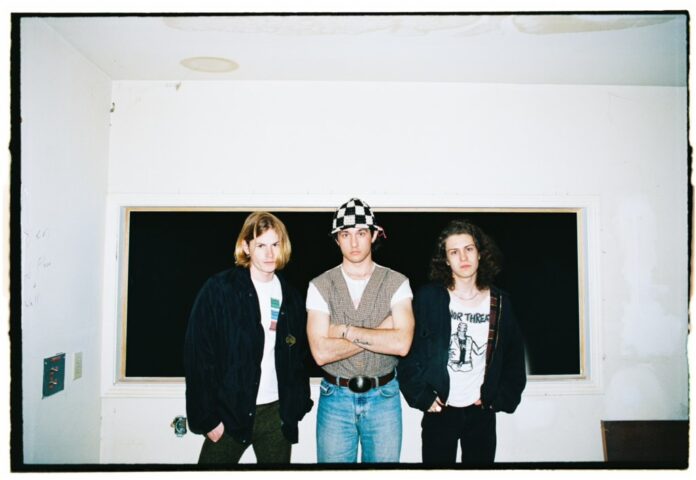 The name “Colm’s Conquest” initially was the name of a side project that frontman Sawyer John Estok and lead guitarist Cam Schmidt intended to start together. This was the first song that they wrote for this “concept EP” that uncovered the journey of a figure named Colm who is stuck in space.

When asked about this track the band members shared:

“This is the first song we’re releasing that we got to demo in our practice studio behind our house. It was nice to experiment with new sounds and ideas in our own space.” – Plank

“A release like Colm’s Conquest is an exciting record for Secondhand Sound due to its unique contrast in comparison to the rest of our discography. The team had a bunch of fun building this track out with a fresh perspective in mind of “less is more.” To follow our debut full-length LP with this tight catchy single feels like we’re swimming into new waters. Very excited for the season ahead.” – Proctor

“What’s interesting about this song is that it’s a rare example of a Secondhand Sound song that didn’t originate on my acoustic guitar. I was able to write the words and melody and arrange it while Cam came up with the music – all simultaneously. We had the demo ready in a couple of hours. Usually, I sit and pie over a song, specifically lyrics, for months. This one came really fast and that was refreshing.” – Estok

I had the amazing chance to speak with the band to not only talk about this exciting new release but their artistry as a whole.

Samantha: How are you all today?

Teagan: I am well! Thank you for asking.

Samantha: Take me back to the beginning of Secondhand Sound – How did each of you start your musical journey as a band? As individuals?

Sawyer: I started playing guitar when I was 11 after seeing Jimmy Page in Led Zeppelin’s “Song Remains The Same” movie. I said, “That’s what I’m going to do.” Fast forward a few years and I met Plank at the highschool lunch table at age 16. We started Secondhand Sound as a two piece in his Dad’s basement. After graduation we moved to Nashville and met Teagan. Shortly after he joined we started playing every show we could in and around Nashville. We’ve played every basement and small venue this city has and that’s something we’re pretty proud of.

Plank: My dad is a drummer and growing up, there were always instruments around. At first I wanted to be a guitarist but it was inevitable that I was going to end up on drums. I then met Sawyer in high school and after finding out he was playing guitar and I was casually playing the drums, we decided to hangout and jam. That would be the start of Secondhand Sound. After graduating high school we decided to move to Nashville to give ourselves a shot at music. Teagan ended up moving across the hall from Sawyer our freshman year of college and then soon joined the band.

Teagan: I started playing bass largely because my older brother gatekept the guitar, as it was “his thing.” What started as an alternative option quickly became an instrument I was fully enveloped in and passionate about. A lot of my early playing experience came from the church where my dad was lead pastor. Through that, I was offered a low pressure environment to learn from the more mature musicians around me who were always enlightening and encouraging… which present me always looks back in gratitude for. I never thought bass playing would be anything beyond a side hobby, though. I feel like in highschool if I had committed to the idea of live music performance and being in a band as a viable career option then I would have been laughed at. I knew I wanted to be in the industry in general. So, a Belmont music business degree became a good reason to make it over to Nashville from California. First week of school, I met Sawyer across the dorm hall playing Mario Kart and the rest is history… I’m definitely the best at Mario Kart in the band by the way. We’ve been dead set on becoming the biggest band in the world ever since… which meant dropping out and running at this dream full force.

Samantha: Who were some of your early inspirations? Who are they now?

Sawyer: When I was a kid, my dad and cousins would fill my iPod with all their music. A lot of 80’s Thrash metal, classic rock and old blues stuff from my dad. My cousins showed me the 2000’s bands like The Strokes, Phoenix, Killers, Kings of Leon, Paramore, Cage The Elephant, Black Keys and Yeah Yeah Yeahs. I still love on all that stuff but more recently I’ve been into a lot of Big Thief, Fred Eaglesmith (his record “6 Volts”), Blaze Foley, The Districts, Fontaines D.C., Shame, Sam Fender, Centro-matic, Frou Frou, Bjork, Current Joys and Pedro The Lion.

Plank: I had John Mayer’s “Where the Light is” live album growing up and I’ve probably watched that concert a million times. That was probably the first moment where I really wanted to be on stage and be a musician at that level. Then when I started to play drums, I would just put on different Arctic Monkeys records and play them front to back. We all listen to pretty much the same bands, so most of what Sawyer listed is what I listened to then and what I am inspired by now.

Teagan: My first breakthrough, “Oh woah, bass is actually really cool” artist was Muse. To me, that was the first time I got personally invested in a discography that my family members and friends had nothing to do with. Fully self discovery. As of right now, a lot of music that currently inspires me is coming out of the UK rock scene. Sam Fender, Declan McKenna, Nothing But Thieves, Inhaler, IDLES, Fontaines D.C, Catfish and the Bottlemen.

Samantha: How was the experience of releasing your debut album and then going on your headline national tour? Any crazy moments?

Sawyer: The year spent making “Best & Worst Of TImes” was frankly one of the hardest I’ve made it through. I was in a really dark place and figuring my way through some really bad relationships and decisions. Making that record was honestly the only thing keeping me going at times. I was pretty nervous to release it, knowing the content of some of the songs and how personal the subject matter is. Definitely a surreal feeling knowing that we have an entire first album out already. I can only hope people are connecting to it in the way that we hoped they would. As far as the tour goes I’m glad that we ripped that bandaid off early. A lot of artists avoid their first headline tour until they know that they are going out to play all sold out rooms. That’s just not real life most of the time. Especially for a band like us. You have to earn this shit. That tour consisted of sometimes playing to 70 people if we were lucky, but other nights, 3 people would show up. At that point we looked at each other laughing like, “I guess we’re really doing this.” There is no way around putting in the laps. By laps, I mean around the country… and eventually the world. There is no drive too long or venue too small. We’ll play and we have played. Whatever it takes.

Plank: Making a full length record was something we had never done before. It was a crazy time in our lives for sure, but we definitely learned a lot. Being able to tour was so tough at first because we released the record in the middle of a global pandemic. It was so nice to finally get the opportunity to tour and play live music again. Meeting people who connect to our music and pay money to see us live is an incredible feeling and we are so lucky to be able to experience that.

Teagan: I feel like it was one continuous crazy moment. Extremely taxing, that’s for sure. The best analogy I can give to describe it is like a car driving down this super long Route 66-esque highway with no end in sight and the gas light is always on. You can only fill up the tank just enough to continue the journey a few miles further. There is no security, just faith in the process and those around you.

Samantha: Do you guys have a favorite lyric/line in one of your songs that really resonates with you?

Sawyer: There are a lot of imagery-based lines in “McPherson St.” that only people who lived on the street in that period of time would understand fully. I am proud of that first verse for that reason. That’s the name of the street I grew up on. It’s kind of like a secret in plain sight for people that played a part in my childhood. I got texts when it came out that made me smile.

Plank: Sawyer is an incredible songwriter and has a lot of great lyrics. I may not relate to the lyrics personally but I think Pocket Change was a big moment for the band. I think it really resonates with the audience and it’s definitely one of my favorite songs to play during the live show.

Teagan: I feel like I’m constantly in awe with the lyricism of Chesapeake. Sawyer outdid himself on that one. Every line carries such weight. If I were to pick any few specifically out, which is extremely hard to do, I feel like the chorus with, “Tell me what matters / Tell me what don’t / Let me see the beauty before it goes,” always calls me back. Truly a coming-of-age masterpiece.

Samantha: What can your listeners expect from your upcoming EP?

Plank: Really good music is what we want to deliver. It is what’s most important and I think this is our best work yet.

Teagan: A lot more of what they love and trust SHS to deliver, but in a vastly richer sonic setting. This new project feels like a clear step up in our discography. There are no misses. For what feels like the first time… the studio space, production, songwriting, arrangements, chemistry, and heart are all there and locked in. It will be very, very good.

Samantha: What can we look forward to in the coming months and how can we support Secondhand Sound as fans and listeners?

Plank: Hopefully a lot of amazing things. New music and lots of shows.

Teagan: Consistently great things. This upcoming season feels like the busiest for the band ever, in both live performance and recorded music, which is amazing. We’re ready to switch it into high gear and capitalize on every opportunity. Simply cannot wait. I’d say the most helpful way to support us is truly just offering consistent attention on the things we’re up to. I feel like sometimes it becomes increasingly harder to remember that fans actually exist out there beyond the guise of ghost Instagram and Spotify followers. Liking, commenting, and sharing things genuinely does make a huge difference.

Listen to “Colm’s Conquest” below, check out their expansive discography, catch them on tour this summer with Savannah Conley, and get excited for their next EP coming fall of 2022!