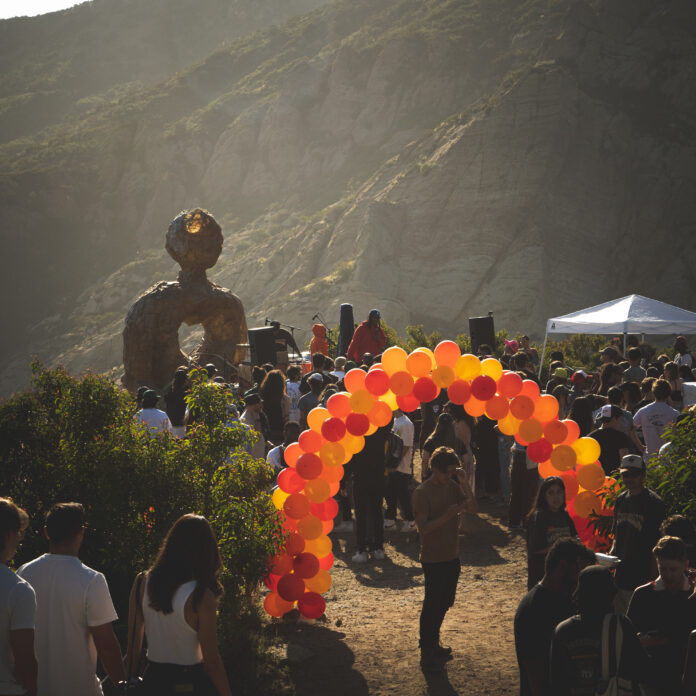 It was a beautiful day in Malibu, California – sunny, with a nice breeze, and the view from the beautiful space where this event is held in the Malibu hills…absolutely breathtaking. With a multitude of vendors, food options, and drink options… on top of eight artists performing live… what could be better than a live music event overlooking an all-encompassing view of the Pacific Ocean? For me, nothing.

To give a little background on Sparky before I dive into the music… Sparky is a multi-faceted experiential event production and promotion startup based in Los Angeles, specializing in scenic outdoor concerts and performance videos. The company’s mission is to change the world through music, reconnecting people with nature through music. Their goals consist of doing shows monthly and eventually throwing shows all over the world in the next five years and potentially even creating a festival.

Now let’s get to discussing these amazing artists that blessed the concert-goer’s eyes and ears.

The event kicked off with two killer DJs Stoic and Pilotkid. This was Stoic’s first show ever, as he thought he was going to be a nurse but then followed his musical dreams. He wooed the audience with awesome beats and a great stage presence. For Pilotkid, it was only his second show ever, as he only started djing two months ago. He too had a great vibe that got the audience moving along to his creative beats.

Next up we had Jus Lovehall & Foolie $urfin, two artists from different parts of the country that mesh their unique sounds together seamlessly. These guys created a collaborative EP together titled Stay Safe, which showcases both of their incredible musical and vocal abilities – handling the entire production process, singing, and rapping for the album. It was incredible to see the way that these artists play off of each other live, harmonizing with both of their insane vocal ranges – Foolie $urfin with a husky grainy tonality and Jus Lovehall with a smooth pure tone. From the moment they started the crowd was automatically hooked on their sound. Some of their musical highlights include their starting track, “ESCAPE,” “WHO I AM” that went hard, and their cover/remix of “Hey Mama” by Kanye West where they handed out roses for mothers day, and “STAY SAFE” featuring Tekowa Lakica.

After Jus Lovehall & Foolie $urfin we had Alex Banin,  Chicago-via-NYC, and now LA-based R&B artist.  Banin’s soulful voice, reminiscent of an Amy Winehouse type of sound, beautifully floated over the music from her live band that incorporated an exquisite harp. The harp was floating over the groove-inducing beat and complimented Banin’s voice beautifully in songs like “Hollywood (No This Isn’t),” “Forget About It,” and her finale “Hawthorne.”

Jonah Zed came to the stage next, a sweetheart of an artist that I have previously written on before for his track “night fever.” (read my article here) Jonah and his band all came from Toronto, and this was their first time playing together in front of people and their first show – Albi Lange (drums), Ron Israeli (piano), Nick Cassidy (guitar) and Jonah with the sick soothing R&B vocals while playing on his bass. Jonah started off playing “Reckless” which introduced the audience to his music. He also played a couple of unreleased songs which is always super fun to get an insight into what is coming next for this young artist (“Day Trip” and “Love Won’t Wait”). He also did some cover songs that stimulated audience members to sing along to the music, a cover of “Wicked Game” by Chris Isaak and a “Pumped Up Kicks” cover by Foster The People.

The second to last artist was seiji oda, bringing to the event immaculate lofi hip-hop vibes. Starting off his set with a deep breath and telling the audience, “Don’t forget to breathe,” a statement that is very important. The weather started to cool down during his set, so people started to gravitate toward the stage, and moved in to see him work his magic. This artist integrated a “talk box” into his music – an effects unit that allows musicians to modify certain sounds– which was fascinating to see him use live. People were vibing out to this music, and one of my favorites was “how u know its me?”.

Last but definitely not least, TyFontaine closed out this incredible event. This now independent artist, previously signed to Internet Money, has grown and continues to grow immensely as an artist and prominent name in the hip-hop field. The audience was extremely encapsulated by this artists performance, signing along to all of his tracks, and dancing like nobody was watching. He offered up some crowd participation to keep the audience entertained, which allowed the audience to show their adoration for the artist. He started off with “Keep IT Real” which had the audience singing at the top of their lungs and then moved to “OutTheWay” from his recent EP B4BMG: The Experience, followed by a multitude of other tracks that were beyond cool. Fontaine’s voice is truly something to remember, with a silky smooth type of tone that was extremely pleasing to the ear – his set was a blessing to see live.

Sparky has created something pretty remarkable and special. If you can make it to the next Sunset Sessions, it will be an event you will never forget. Listen to all of the amazing artists that I touched upon below, they were all noteable in their own unique ways.