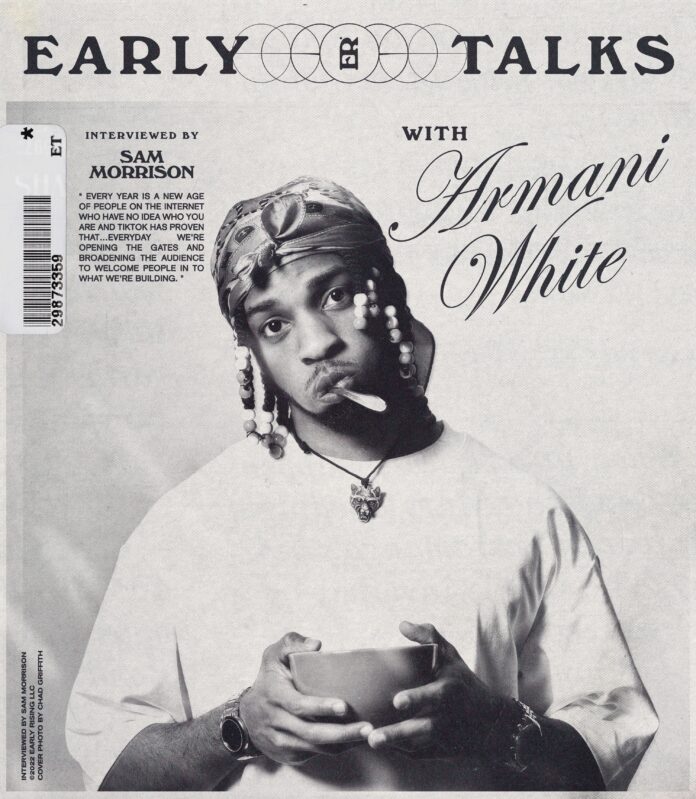 Sam: Bro, tell me about this joint. I’d love to hear about how this song was created then we’ll go from there.

Armani: Yeah bro honestly, I was seeing bunch of people who were doing tiktok’s and shit and this wasn’t a record I made for tiktok. I just saw abunch of people making content and things like that. I always felt like I was in this rat race of trying to make sure the next song was ready and then the next song after that etc. So I came to a point where I was like, man let me just fall back for a month or two and create all the music that I needed to make for the next year, so I could really have fun with the tiktok shit. This is one of the records that I wrote. didn’t have a chance to make it, but at the time we were coming off the hype of the EP. We were doing the label calls but everyone just kept saying the same stuff. Just the regular A&R shit…telling me to keep grinding independently and build up my leverage… and I’m like how long am I going to hear this. And a lot of times I was over here looking at the artists on these labels and realizing I was doing better numbers wise than most of them. But anyway, I had these records that I made last year and one of the records was this Billie Eilish record and I was planning out how I was going to release each record, so I made this long google doc of a step by step plan based on all the content I would do on instagram and tiktok…and we just had that video from the night when we recorded the song and I honestly planned on that video getting like 50,000 views. I was with my roommate on the couch, I posted it, woke up and it had 1 million views.

Armani: Man, everything was static, so it didn’t hit me right away. I saw the million but I didn’t necessarily know the impact, because I had nothing really go viral yet before this. So in my head, I’m thinking it’s just about to be a bunch of little kids, but then I look at the comments and I realize that world star is in here and complex is in here and all these different names. Now, I’m starting to trip out because this really started to become a thing. I was tripping because my life was just the same thing of me waking up going to the gym and making music but now, I had to react on it and that plan I wrote, now has to go into full effect.

Sam: And how closely did you stick to that plan that you wrote out?

Armani: Essentially, to a tee. The only thing that was out of our control was the timing. Even one post that I put up that had 3 million views, we were supposed to drop that weekend but there were some behind the scenes things that messed it up. Shit got shook up a little bit, but I had to try and stick to the process the best I could.

Sam: How big has patience been for you during this process?

Armani: Honestly bro, I had patience before, but this was one of the moments where it fucked with your anxiety and fucked with your mind. Ill be honest, every post on tiktok gets like 500,000 to 1 million views and I don’t read any comments. People just be ripping me to shreds in there. Every joint is someone saying, “dude, don’t even worry about the song, you lost momentum..you waited too long…the hype is gone.” And it’s always the same one guy or few people who are commenting. That shit definitely fucked with my patience because I wanted it to drop right now, but we had to figure out a lot of things behind the scenes. There was a lot of stuff in the background.

Sam so with that, how are you feeling that the track is finally dropping?

Armani: Bro, I’m scrambling. My mind is everywhere. With moments like these, I feel really good about it and honestly my life has just transformed into a content creator; So I’m just making sure I have the right pieces of content to go up and on top of it, my team is doing a lot of the groundwork but there are still certain people I want to hit up and check in on. right now I’m just doing a lot of check ins since it’s been a 3 month process.

Sam: So as far as tiktok man, I talk to a lot of artists who don’t believe in it yet…Based of of your experience, would you encourage artists to get on tiktok and use it to grow their fanbase?

Armani: Absolutely. I’ve been around for a minute and I’ve been on the internet, but every year is just a new age of people who are getting on the internet who don’t know who you are…millions and millions of kids…Tiktok is proving that and I’m seeing it happen. a lot of these videos have a bunch of comments and it’s always new people who have never heard of me before, so I really think we’re broadening the audience to these newcomers.

Sam: That’s facts bro…After this song though, what are you excited for? What are you looking forward to?

Armani: There’s this song called, “Diamond Dollars”. There was this campaign I did with the NBA last year and I was like dang this shit is kind of hard…After this record, we’re just riding off the high and straight into the next record. I had no idea that this would be the record…I had another record that I liked more, but yeah other than the billie song, there are a few songs that I really want to get out after this.

South Dakota native and Nashville based singer-songwriter Tiffany Johnson, is the creator of an incredible, catchy, and relatable track that has been...
Read more
Home FeatureInterviews