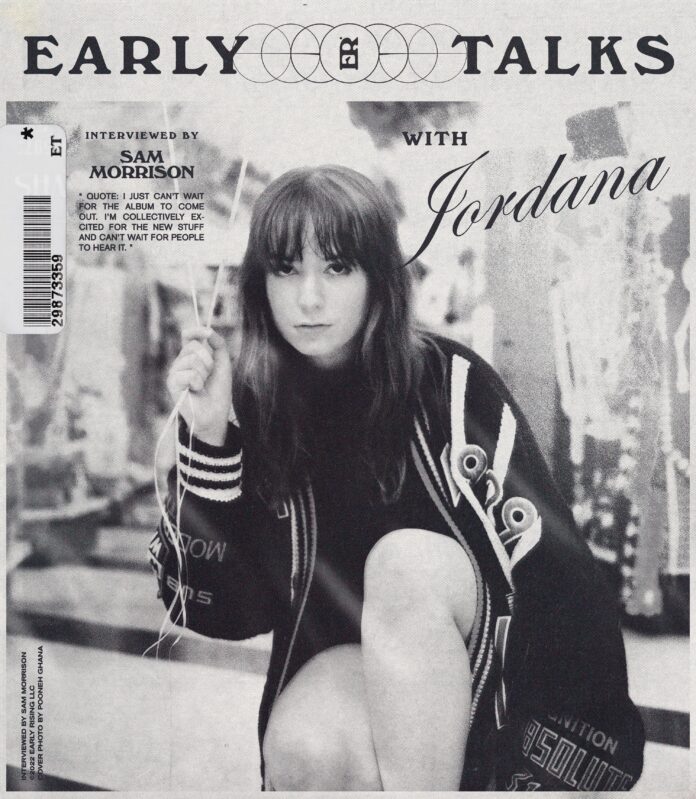 Sam: Okay, so I’ve been a huge fan of yours for a while now & I have to know, where are you from originally?

Sam: Amazing, I grew up like 45 minutes outside of DC, so the DMV area is something I definitely claim.

Jordan: Oh my God, that’s super cool!I was born in DC. My mom worked there so every time we had a day off from school, we’d go to work with her at like 5AM and just walk around DC.

Sam: What a small world, I love it! It’s rare you meet people from that area. So with that, back home, there are definitely creative people who do cool things, but it’s definitely not a musical hub. What drew you to music? What got you started in it?

Jordana: Well, my dad played the Organ in a couple of churches that we would go to. He did it as a job, so one week we’d be Lutheran, then Methodist, then Baptist. It was funny. That was definitely my musical upbringing in that way, but at one of the churches, I saw this guy playing violin and I thought it was the coolest thing ever so I started taking lessons from him and expanded from there. I was playing violin throughout school and then realized that being an artist is something that you could do.

Sam: Was your dad excited to see that you were following in his musical footsteps?

Jordana: Yeah, he was like ah, you’re taking after your dad…even though I didn’t play Organ. We had a keyboard that he really wanted me to play, but I just knew I liked the thing with strings more.

Sam: When did you start songwriting and making songs? Was that early on or a little later?

Jordana: Um I started violin when I was 9, then I started playing guitar when I was 13…my friend taught me a few simple chords. Then I got a ukulele because I thought it was simple enough and started writing songs back in like 2017.

Jordana: Yes, wow. That’s not that long fo a time.

Sam: It’s not, but you wouldn’t be able to tell in your music, because it’s phenomenal! But, When was the moment you went from writing songs to realizing that you kind of wanted to pursue the artist career thing?

Jordana: I guess it was around the time I started recording. I had this little iPod that had garage band on it and then I switched to my laptop. I would just upload songs that I was happy with on to Soundcloud and that’s when I realized that I wanted to do it.

Sam: Who were some people who you grew up listening to?

Jordana: Well, my mom is from Pittsburgh…

Sam: My mom is from Pittsburgh too!

Jordana: No way, this is crazy…we have too much in common…But yeah, to answer your question. We would like go visit our family and stuff. My aunt and uncle and grandparents. And yeah, my mom raised me on Death Cab. We listened to a lot of Coldplay as well. Well, I forced her to listen because I just love them.

Sam: I love that. When was a moment where you went from wanting to do music to realizing that you actually could do music full time and make it a career?

Jordana: I always found out about cool stuff, like my music being noticed by my friends. And one time I was on facebook and one of my friends posted, “woah, from the north beach boardwalk to a pitchfork article.” and I’m like what! Someone wrote an article about me? It was a track review!

Jordana: Yes, oh wow. it does.

Sam: So tell me about the album and tell me how you want people to perceive it.

Jordana: I hope people can interpret things in their own way. It’s how I feel about all of my music, because I even do that with songs. sometimes songs just change their meaning in either a small or big way. Things are always changing.