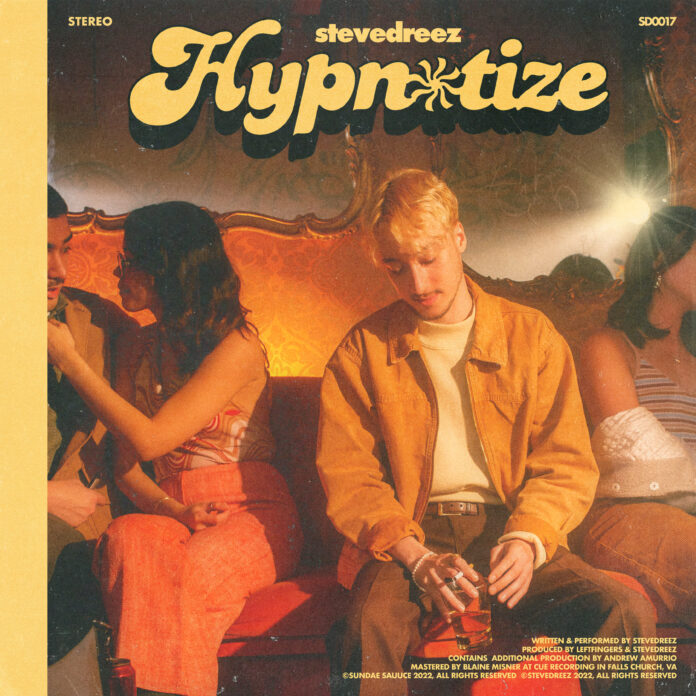 A lot of my music writing tends to fall into the indie-pop/bedroom-pop sphere, but to be honest, there isn’t necessarily one genre I favor over the other – so long as it makes me feel something, then I am here for it – and today, I am beyond stoked to be premiering an artist who knows how to make me feel something like no other. His name is Stevedreez, he just dropped his single “HYPNOTIZE,” and after writing this review I will continue to shamelessly dance along to it in my bedroom.

“HYPNOTIZE” feels like the secret after party, where all that really matters – and all that should matter – is temporarily pressing ‘pause’ on life to let the music take over your body. As if the lights have flickered into a fluorescent glow and you’re just about ready to leave the function, but someone pushes you towards an ominous, hidden black door at the back of the venue, and suddenly, your eyes are blinded by the sparkling lights of a disco ball, flared pants, and people getting down on the dance floor. Think: Dirty Dancing, but if it took place during the peak of the 70s Studio 54 era. (And for my fellow Gen Z readers, think: the night club in Club Penguin, but IRL.) Through pulsating 808s, melodic synths, and vocals that are smooth as butter, Stevedreez invites the listener into his world which is nothing short of a hypnotic, funkadelic trance. Between dance breaks, Stevedreez asks, “Can I get you in the groove?” and it’s a bit of a rhetorical question, because there is no way one will not be immersed into “the groove” by the end of hearing this track.

I’ve been actively attempting to withhold my use of “vibe” as an adjective, but in the case of “HYPNOTIZE,” it just fits almost too perfectly. Stevedreez has managed to blend the old with the new, channeling his “old soul” energy into the modern day, creating a funk-pop soundscape that is, for the lack of a better adjective, a vibe and a half. Perhaps even two full vibes. It’s almost as though Channel Tres, Kaytranada, and Thundercat decided to hop into the studio and see what happens.

Be the first to listen to “HYPNOTIZE” below, and while you’re at it, check out the track’s visualizer!

Now, excuse me, as I put on my sequin pants and have an after party of one.

Tatum Van Damhttp://tatumsportfolio.com
i write about music that i want the world to hear (london, uk)
Previous articleFlipturn / Halfway / Brooklyn Baby
Next articleBAD THINGS COME IN 3’S (EP) // NOT THE MAIN CHARACTERS (Q&A)