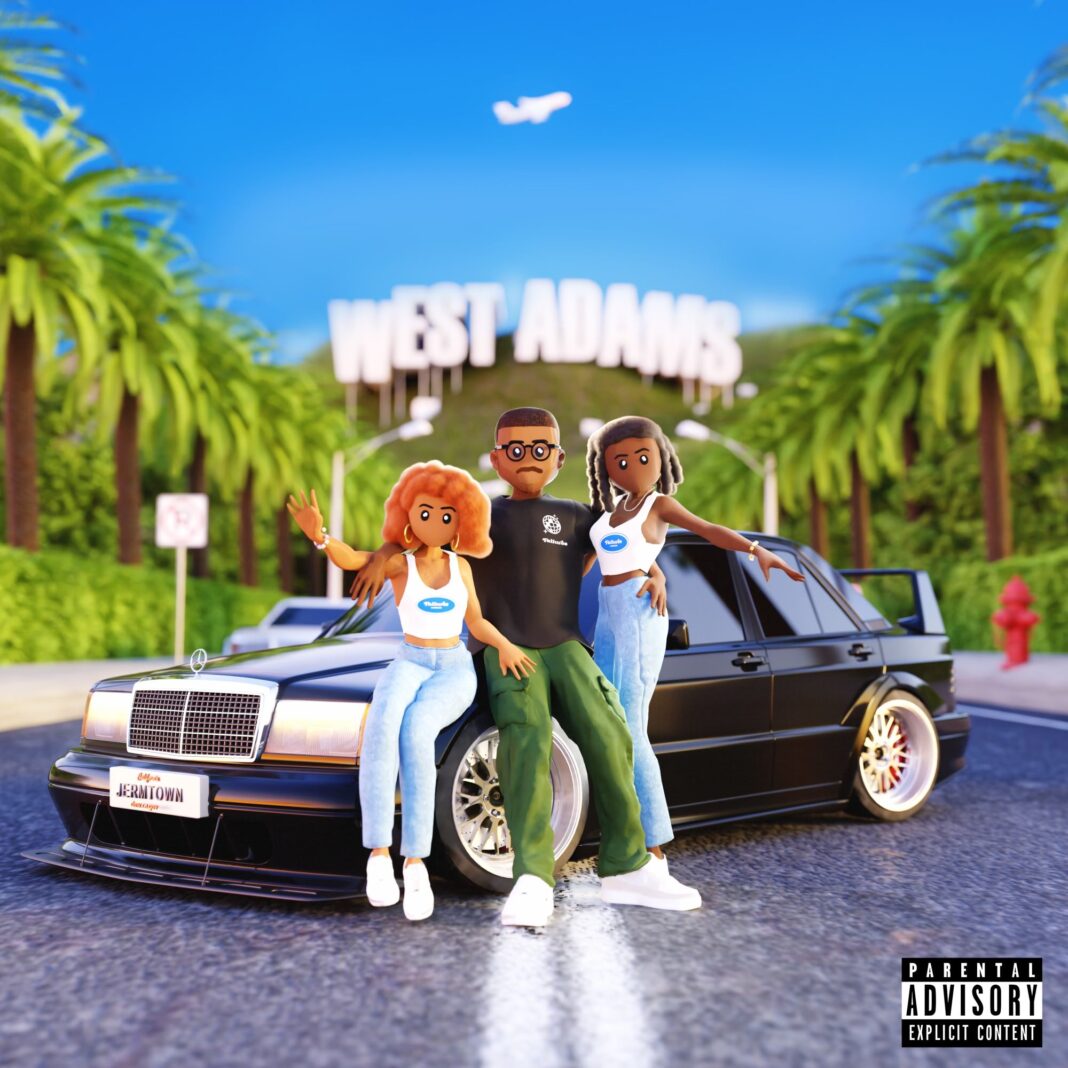 Jermtown’s latest EP shows that there are sides to Jeremy, the artist and the person, beyond fun lyrics and bombastic delivery. While the Detroit-born LA-based artist can play the bad dude, West Adams also reveals a more candidly thoughtful scope of his psyche. Inevitably, the West Adams EP has songs that you would play in confidence to a lover and songs that you would play while stomping out a cop.

Clocking in at 21 minutes and accommodating 7 tracks, West Adams is a tape that contemplates the ups and downs of a new lease on life in the city of angels. Audacious tracks such as West Adams, Rocketpad!, and Weezy Freestyle all feature BOLD delivery, menacing production, and bars that balance being uncannily relatable yet reflective of your most humorously ridiculous thoughts. Lines such as “I keep a sugar mama like I’m Oscar Proud b*tch” might sound like a funny lyric, yet it’s indisputable that Jermtown is dead-serious with his delivery. The combination of humor and hubris maintain the effortless charisma of Jermtown’s music. Also to be noted are the consistent references to Seattle women, fruit smoothies, and making money in LA- these sorta lyrical quirks help ensure that Jermtown’s speaking from an authentic and tastefully specific place.

Meanwhile, tracks such as Strawberry Smoothie, Wildberry Lavender maintain that frank humor with hooks that reflect a softer message for a lover. It’s no surprise that Jermtown is a lover, but the extent to which he’s willing to say it like that on a track presents a sharp contrast to the lovably arrogant character of the project. On top of producing the whole project, Micco Nami glides on his own beat with velvety autotune hooks that speak directly to a love interest. “Out of sight but you still on my mind, I’m doin fine, missing you don’t go nothing to hide, come to my side, I’m sending for you, spend it on you”. Lover boy alert! Yet, in true Jermtown fashion, brash lines such as “If its mob shit then I’m finna swoop my brodies up, she like good d*ck I put it in her fallopian” are never too far behind the sweet stuff.

Despite the occasionally out-of-pocket lyrics, West Adams is a profound and deeply personal memoir of rebuilding a life in Los Angeles. It’s truly refreshing to hear an artist express a level of excitement and appreciation to be in Los Angeles when songs about the opposite are recorded in abundance. While the sound may vary, the essence of “Jermtown” is omnipresent on this project. His bravado remains the constant factor that maintains the artistic integrity and personality of West Adams. Following trends in music is easy, and so is faking your stunts- but finding creative, novel ways of expressing resounding themes in the genre is a talent of Jermtown that’s genuinely hard to find in 2022. Learn more about Jermtown in our q&a below!

Me and Micco go back to early 2015- I was one of the first people he ever made beats for. And he was sending me beats every week and I wasn’t feeling any of them for months until he finally came to the studio one time when I was working on my first mixtape, and landed a beat. And then he sent me another fire beat a few weeks after that, which landed on my second mixtape, and from that moment on, every month we’d work on something. Then it just got to a point maybe around 2019/2020 where we understood each other’s process and he understood what I was looking for. He understood everything about me as an artist and as a person. He was like dating one of my best friends  from high school at the time-I forget to say that was how I met him. So that’s how we got in touch and working together and spending more time together & sh*t. We just just learned each other as people. To this day, he’s the easiest person I’ve ever worked with; It’s the most genuine artists-producer relationship I’ve ever had.

What were your vibes when you made the tape?

We made the tape in March 2020. It was the first week of March. I’ll never forget it. It was a week before quarantine happened and COVID wasn’t that big of a deal yet. I was three months into living in LA; I finally been at a job for a couple of months. I’ve gone on a few dates with some new girls. It was just a feeling- the newness of living here. I would always come visit for a couple of weeks or a month at a time but living here felt permanent and felt like I had a chance to kind of just recreating myself as a person and that’s really what inspired this whole tape.

Coming across other artists in LA that were killing sh*t really inspired me to go harder. And Micco just happened to be coming to town the following week. I played him some Youtube beats for reference and off the plane, straight to the apartment, the first thing he did was open the laptop and start making some beats. I think we cut Rocketpad first, then the West Adams title track right after. And we didn’t even know we were making the tape- we were just making songs. So we would make a song, go get some food, go shopping, come back to the crib, make another song, go to sleep, wake up in the morning, make a song, go get some food, go to the beach, hang out, come back, make a song, go to sleep. It was just a very organic process. And that’s how this sh*t came about. Like I said our chemistry is so good that we didn’t have to overthink it or try to conceptualize anything too much; it kind of just fell into place.

Next step for me man really is everything like I took a couple years hiatus off of music just to kind of figure out myself as a human being. So another tape coming before the end of the summer! Shows, you know, still designing rugs and just jumping back into being a full blown artist and not letting my foot off the gas- just 110% out of me moving forward.