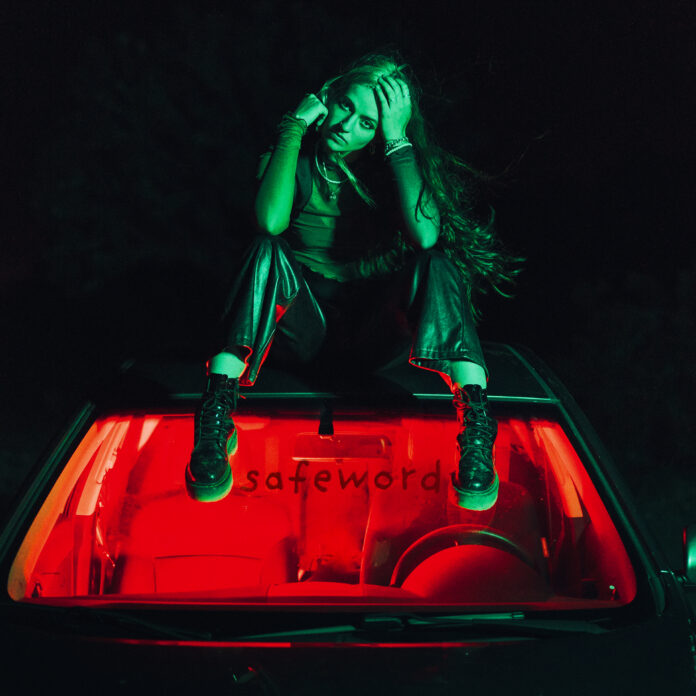 Have you ever felt existential dread? Do you get nagging thoughts in your mind about life’s meaning and purpose? Maybe you wish there was a way you could press pause on your life, while hoping you can experience as much as you can before it’s too late. Aimee Vant, a Los Angeles-based singer-songwriter from Reading, Massachusetts, articulated this sentiment beautifully in her latest powerful anthem, “SAFEWORD.”

“SAFEWORD” is an electro-indie-infused track with a modern pop-punk twist that is influenced by the relatable and often unspoken fact about how life is seemingly fast-paced and daunting at times. This anthem eloquently addresses the challenges of navigating your youth, pressures, chaos, growing pains, and all… while living in a world that can be unforgiving and unpredictable. Throughout the song, Vant’s bold voice soars over the dazzling exuberant production, showcasing her unique nuanced sound, while highlighting her intricately intimate lyricism.

When asked about the track Vant says, “I originally wrote SAFEWORD as an emotional singer-songwriter-esque ballad. One night I came home in an existential and frustrated mood and my co-writer Tucker Click and I decided to try it out as a hard-hitting pop-punk anthem. For these reasons, SAFEWORD has the soul of a struggling lyricist embedded in the grit and high energy of a pop-punk band. This song is one to scream along to in your car and is made for anyone with a bit of existential dread.”

Vant’s music truly has the intoxicating ability to pull you in, hooking you from the moment her songs begin. Her messages are raw and her musical soundscapes are electrifying.

I had the chance to speak with this talented artist and ask her a couple of questions about her background and artistry.

Samantha: Can you tell me a little bit about your background?

Aimee: I was born and  raised in the Boston area and always had a magnetism towards music. I originally started as a drummer when I was very young, but didn’t start songwriting until I was 18. I idolized artists such as Kelly Clarkson, Sia, Green Day and Coldplay growing up, and I never thought I could be capable of writing in the same way that they did. This imposter syndrome kept me from writing until I started attending Berklee College of Music in Boston, where I began to observe and learn from some of the best. I graduated with a degree in Contemporary Writing & Production and quickly moved to LA, where I’ve been settled since.

Samantha: Was there a moment for you that you realized making music was your path?

Aimee: Until college I was always torn between following a career as a musician or as a visual artist. As my high school years came to a close, I realized that nothing motivates me quite as much as music does. Through my years of learning different facets of music, I’ve only felt excitement in the face of its vastness. All elements of it are challenging in a way that drew  me in like nothing else.

Samantha: What inspires you musically and in general?

Aimee: I’m mainly inspired by growing pains and by my experiences with the people in my life. My songwriting contains a conversational tone that closely reflects how I speak to the people I care about most. The music I make that I feel the most connected to, is usually the songs where I’m addressing a specific person.

Samantha: What is one of your favorite lyrics you have ever written?

Aimee: “I wore your thoughts like clothes that shrunk in the wash, too close to feel soft”

Samantha: Do you have a dream collaborator?

Samantha: What is coming next for you now that “SAFEWORD” is out?

Aimee: After SAFEWORD,  “Trash” is one of my favorite songs I’ve ever written. It’s incredibly candid and features some of my favorite production to date by the amazing Michael Dunaief.

Stream “SAFEWORD” today, dive into some of her other tracks like “Airbnb” and get ready for new music coming real soon!

Before Jeffrey Eli was making pop music to break the gender binary, he was a pre-teen singing online from his hometown bedroom...
Read more
ReviewsQ&ASongs