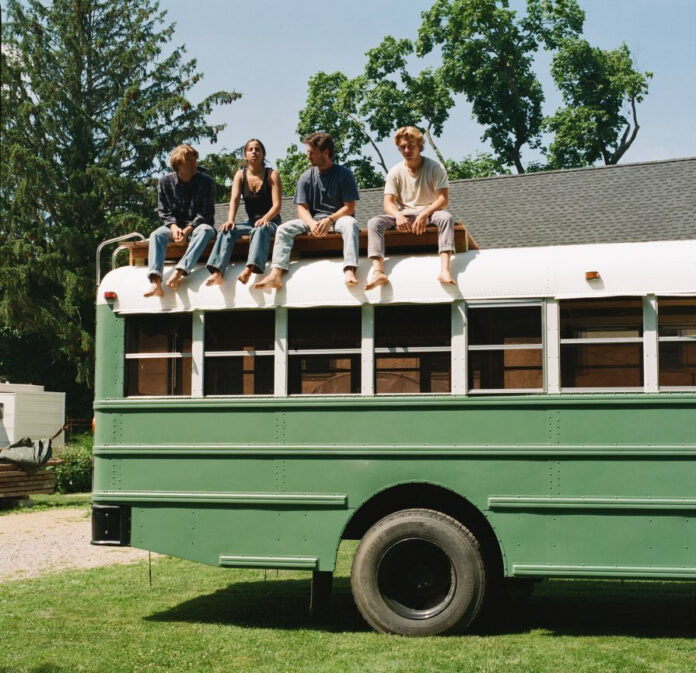 I found Arcy Drive on none other than TikTok back in February. I immediately messaged them and asked when they would be releasing music and in turn, they told me that they would be releasing music in the summer and thanked me for my support. Months went on and I kept watching their incredibly captivating TikTok videos which showcased attic jam sessions, live show footage, and BTS footage of them DIYing their tour bus (converted school bus). After patiently waiting, since they haven’t made it to Los Angeles yet, I was beyond excited to see that they FINALLY released a song on all DSP’s titled, “Roll My Stone.”

Arcy Drive embodies the brain power and musical talents of 4 individuals, Nick Mateyunas (Vocals/ Rhythm guitar), Brooke Tuozzo (Drums), Austin Jones (Lead Guitar), and Patrick Helrigel (Bass). They have managed to cultivate a cult-like following that is more than happy to follow them on their journey.

Because of their loyal fanbase, even without any studio recordings released on streaming services, the band created an interactive map that allowed fans to drop a pin on the map representing where they wanted them to play. After collecting over 3,000 pins, they decided to live out their dream, convert their school bus into a tour bus, and travel the country playing their music. Although there have been some bumps in the road, due to their vehicle not moving over 50 mph and having no AC, they are enjoying the ride and are extremely grateful for their fans coming out to their shows.

Now getting to their first ever release…“Roll My Stone.” This track was the first song that the band made and showcases Arcy Drives’ unique genre of sound entitled “attic rock.” They define this as a warm, nostalgic, and scratchy sound straight from their home in small, sandy Northport, NY. Nostalgic, authentic, passionate, and raw, “Roll My Stone” is  a first taste into what the band plans to offer the world.

The band will be recording their full length live album in two weeks in California while living on their bus. They will be posted on YouTube as live sessions, which has been successful in the past. In addition, they will be releasing the audio on all streaming platforms. The band says, “We feel the best way to understand our music is by watching us play it live,” so when they are in your city, I highly recommend seeing them in person.

Listen to “Roll My Stone” today, check out their TikTok page, watch their Live Sessions on YouTube, and find them on tour in a city near you soon!