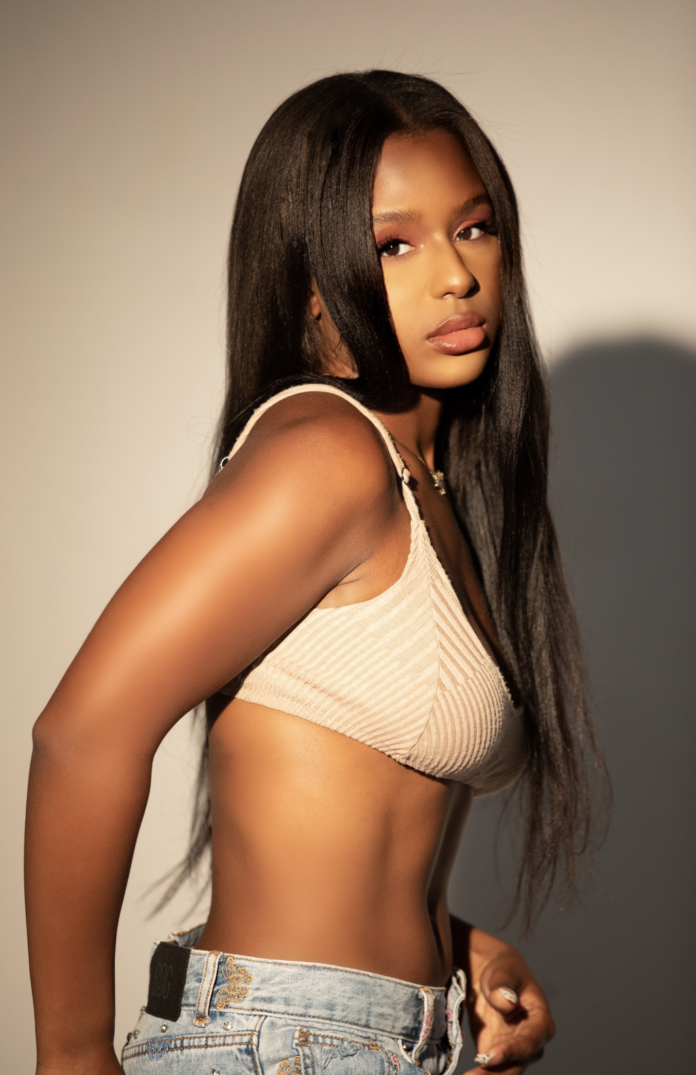 I had the privilege of speaking with Jae Stephens, a self-taught singer-songwriter and producer, born in Texas and raised in Los Angeles. The soft-spoken singer chatted with me from the comfort of her bedroom and opened up about her two-year hiatus from music and her most recent EP titled High My Name Is. Being told she could sing before she could talk, Jae reveals the truth about being an independent artist and taking a step back, as she became the go-to writer for artists such as Sinéad Harnett, Tiana Major9, UMI, and much more. Having spent the last few years writing for others, the singer also opened up about dealing with self-doubt and her transition from posting covers on Tumblr, to becoming a professional artist.

Jae: I’m doing well! It’s been a long week. I just celebrated my birthday and I’m trying to take it easy.

Dina: Happy late birthday!! Is your family in LA? Were you able to celebrate with them?

Dina: What was the transition from Texas to LA like?

Jae: I don’t really remember much of the transition. I was very young. I’ve lived here [LA]  most of my life. I go to Dallas every Christmas to see my grandma and grandpa. Other than that, I can’t proudly claim it. I’m a Pasadena girl through and through.

Dina: Did you come to LA for music?What was that start like?

Jae: My brother and I did it all. We did the acting, we did the singing, the performing and the dance classes. That’s what I grew up doing.

Dina: So would you say you come from a musical background? Is that how you got into singing?

Jae: My parents would love for me to say that, but I’m gonna say “sure.” My dad definitely grew up singing in church. Honestly, it was against his will because my grandparents were avid church performers and he was a background singer. But, yeah, that’s pretty much the full extent of it. My mom’s side? There’s not really any music whatsoever, but I do like to think I got my writing from my mom. She’s always been a writer. She likes poems and short stories. She’s always done that, so I think I kind of got the best of both sides.

Dina: Would you say your passion for music comes from church?

Jae: Church has definitely been like a huge foundation. I haven’t done a lot of live performing yet, and I feel like the only reason I’m not too nervous to get started is because I was literally singing in church every weekend. So that’s definitely been great for me because that’s the only practice I got. I’m excited to actually really start singing my music live.

Dina: So you’ve been singing since you were a kid… when were you like, “alright, I want to make music. I’m gonna go for it?”

Jae: When I was born!  It was the only thing I was good at. Seriously, I’ve just always been singing. My parents said I could sing before I could talk. I went from singing to learning how to play guitar so that I could accompany myself. From there, I started writing. I started writing because the only songs my parents ever made me sing were gospel songs or songs by grown women. I was like, I need something a bit more chill. So that’s honestly why I started writing when I was like 11 or 12-years-old. I then got into producing. I honestly think I was good at it first and then the love for it came after, which is hilarious.

Dina: Hey, sometimes you gotta do what you gotta do. You mentioned growing up and mainly listening to Gospel…Would you say that’s where your influence comes from? Or do you feel like you Steered away from that? I ask because I don’t really hear people with your sound.

Jae: Thank you. I appreciate that because I don’t know what I’d call my music. I really do think it’s a mixture of everything I grew up listening to, which is obviously a lot of what my parents put me on, you know?  Neo soul, R&B and Gospel. You can definitely hear the influences. And then there are things that I gravitated towards as a kid, which was like straight up Mariah Carey and Beyonce. When I was hitting my rebellious phase I didn’t want to sing Gospel songs anymore. I was like, I wanna listen to Lord and Lana Del Ray and Arctic Monkey. My whole life was just like black and white, like a Tumblr girl.

Dina: What was the transition from posting on Tumblr to becoming a professional artist? For those who may not know the humble beginning, you started off doing covers and gaining traction on Tumblr, but at what moment did you realize this was a full-time career for you?

Jae: I feel like I realized it was serious when my covers on Tumblr started going up. Like not viral, but they were getting so many notes. It gassed me like crazy. I think that gave me a lot of motivation and encouragement to actually keep going. Tumblr opened up so many opportunities. That’s how I met my manager. He saw my covers and my original songs that had gone crazy on Tumblr and SoundCloud and sent me a message. We’re actually still working together today!

Dina: That’s so wholesome! I do want to jump a bit. So I know your last EP was And Friends in 2021. How would you say your sound changed from F**K It I’ll Do it Myself  to And Friends?

Jae: I  honestly feel like the two EPs are very cohesive… hold on, let me start over. Let me think. I feel like they are kind of similar.The attitude and approach towards making them was very different because F**K I’ll Do It Myself was written sitting right here [Jae’s bedroom]. I produced, wrote and recorded myself. I was doing literally anything and hoping something would stick. At that point in my career, I was kind of being forced to make music. My manager and everybody was like, why aren’t you producing, you know how to do this. I was being told that I should be doing more. Eventually, I was like, shut up, I’ll do it. With And Friends, I feel like it was a bit more calculated. Those songs were not written for me. I went into those sessions expecting to fully write for other artists.

Dina: Let’s jump to current music. “What’s a Monday” is the lead single off your new EP High My Name Is. Tell me a little bit about the EP and what the process of getting it together was like. Why did it take so long for new music?

Jae: I actually quit music for a bit.

Dina: Pause. What do you mean you quit?

Jae: Let’s run it back…I literally retired. I tell everyone this is my third time coming out of retirement. But now I’m motivated, I’m positive and I’m inspired. I’m ready to go. I want to give this [music] my all. Honestly, I hated the whole process of making F**K It I’ll Do It Myself. It was not fun. It was draining and I was so exhausted. I thought this wasn’t for me. I was just really low. The bullying from my manager is honestly how most of my songs saw the light. I’m kidding. I love him. But literally, I had kind of just been like, I think I’m just gonna lean into songwriting. I gained confidence in the songwriting sessions. I had to sit back and remind myself that these people believe in me and that I was picked for a reason. I want to go on record and say that I’m not done! This is just the beginning. I’m actually really excited.

Dina: I’m so glad to hear that! I want to personally thank your manager!

Jae: Honestly, shout out to him!

Dina: Okay, you recently partnered with Issa Rae’s Raedio. What’s that like?

Jae: You know what’s crazy, I didn’t even know what was going on when that all happened. Basically Google partnered with Raedio and they were looking for female musicians. I didn’t even know I had entered until I won. I was really honored that they brought me on and wanted to help, it’s been a really great experience.

Dina: Now that you’re working with Raedio, what can we expect from your new music?

Jae: We got a budget. We got mix and mastery. We’re giving soundscapes and harmonies for days, which is nothing new for me, but I just feel like it’s all packaged so much cleaner and I’m so proud of it. I feel genuinely confident. On F**K It I’ll Do It Myself, I was fake confident. I feel like this time around I really mean it and it sounds like I do. It sounds like I’ve grown up a bit and I’ve matured. I believe in what I’m saying. That’s why I named the new EP High My Name Is. I feel like it just sounds like an elevation and I wanted it to look like an elevation too. From the cover art to the videos, I want to show my growth.

My favorite songs off the EP are “Give It To” and “Investment.”

Barely legal are so cool. They’re outta Tampa, Florida which I’ve found to be a hotspot for not only great but innovative...
Read more
InterviewsReviewsQ&A